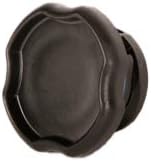 An ACDelco GM Original Equipment Engine Oil Filler Cap is a threaded or quarter-turn cap that seals the oil filler opening on your vehicle’s engine, and is a GM-recommended replacement for your vehicle’s original component. It has a rubber sealing ring that keeps the engine oil and crankcase vapors in, while keeping water and dirt out. This original equipment engine oil filler cap has been manufactured to fit your GM vehicle, providing the same performance, durability, and service life you expect from General Motors. 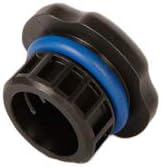